Writing is the most powerful way to insert ideas in the world. For centuries, a pen and paper were the only tools that great thinkers needed to create movements, put thoughts in others’ minds, and inspire positive change. This process has now been forever altered.

In modern times, the internet has democratized access to readers. Writers no longer need an elusive publishing deal to reach an audience. But building an audience is one part of the journey. The most important bit is finding a group of people that can inspire you to become your best self.

Communities were the most important facet of the stone age. The stronger your community, the higher chances of finding a mate and survival. It’s the same need today, but a different reward online.

In the social architecture of impactful communities, Nicki Wilde writes that “The best communities, create environments that make it easy for members to connect and create value for one another. And sometimes the connections in themselves create most of the value.”

Fortunately, anywhere you are in the world, whether you’re a Jamie Russo from New York City, or Ayomide Ofulue from Lagos Nigeria — A core set of principles empowers prolific writers to build extraordinary audiences and impactful communities.

You can find your circle. Start off by becoming a lighthouse.

Ayomide: Lighthouses attract people from all over the world. They’re a beacon of light, either to guide people to safety, or down a particular path. 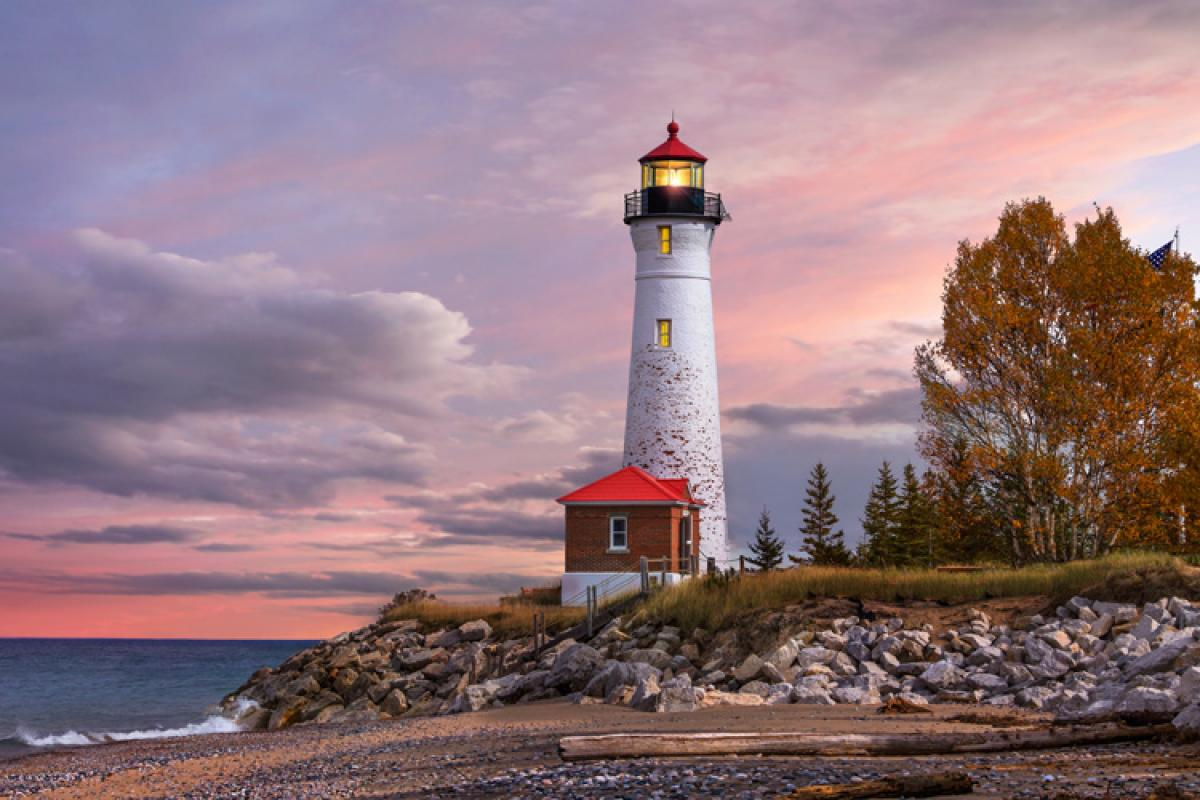 I’m a lighthouse on the internet for people that are motivated to change the world. It only takes one article, an essay, or a single idea to say something sensational. There are fewer barriers than ever! By creating, publishing, and writing, we all have the ability to influence.

My goal is to inspire others to shine their light. In doing so, I find other people with inspiring stories, similar interests, and a desire to publish. Together, we find motivation in working upwards. What excites you? What change do you want to see in your own life or in others? Start from there.

Light by Light, we lift each other up.

Jamie: Twitter is the most remarkable way for writers to find like-minded people on the internet. By sharing ideas and crafting stories in real-time, writers send out a bat-signal for other tremendous creators.

I launched ‘Goodnote’ on July 13th. It inspires positive change 50 words at a time. By live-tweeting my experience building a brand from scratch, I’ve found other exceptional creators that propel me beyond my personal limits. On Twitter, I discovered people that are curious, passionate, and aligned with my mission to spread kindness and positivity on the internet.

With Goodnote, I send a letter to someone in need for every $1 we raise. By being a lighthouse for kind, generous, authentic writers, I form lasting friendships while simultaneously building an audience. That’s a win, win.

Here’s my secret: “Your vibe attracts your tribe.” By sending out signals of kindness and positivity, I create a multiplier effect that reverberates across Twitter. 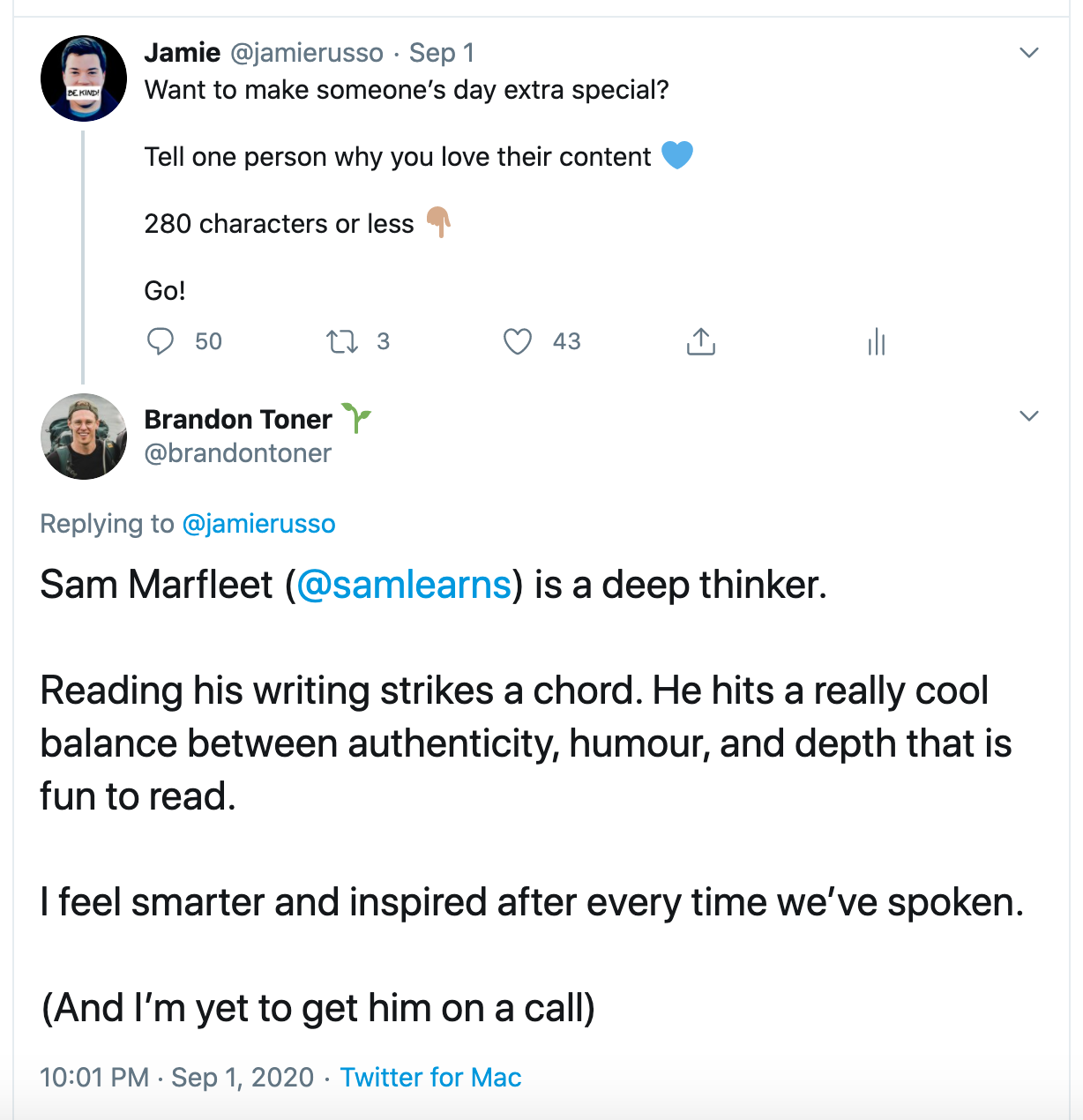 Jamie: Initially, I wrote about the things that interested me most — social issues, business for good, and the people behind mass movements. Over time, I discovered an underlying theme. Intertwined into every passage was a feeling. An emotion.

I adopted a beginner’s mindset, approached every day with kindness, and over the course of a few weeks, I discovered other amazing people on Twitter. Mostly, I found people giving and seeking kindness. Together, we added value to one another’s lives, brightening one another’s days.

The value I add lies in human connection. During a time when we’re apart, my strategy on Twitter is to bring people closer together. I accomplish that by focusing on friendships, not followers.

Ayomide: Value is subjective. However, in one way or another, if you help people get from point A to point B, they’ll respond in a positive way.

Unfortunately, people try to sound too smart. They focus on getting famous when all it takes is a genuine interest in other people. Don’t seek to find an audience, aim to form a community.

The first puts you under the pressure to perform, while the latter inspires you to progress. Tweet to find community, then publish to inspire an audience.

As a writer, I add value by publishing useful articles [Like how to overcome impostor syndrome], sharing tips about writing, supporting other creatives, and by being a good person [to be honest]. Life is already hard for too many people. If I find something useful on the internet, I share it with others.

Pining for others to win is the most genuine way to find valuable communities.

Ayomide: Nothing garners you more support than by bringing people along for your journey. For me, I envision a system where a constant flow of ideas, is succeeded by a desire to make others aware of it and then build from there.  Think for one. Share for two.

Then, I expand on the ideas:

Recently, I launched a newsletter where I follow the same exact process in everything. Why learn how to write alone, when you can help other budding writers as well. ‘Think, share, Build and learn’ is the most powerful way to build tight feedback loops.

After adopting this mindset, I saw immediate results on Twitter in less than one month.

When you build in public, it’s easier to create more content because you have more ideas to offer. The decade of hoarding work is behind us. The knowledge economy is here to stay.

Jamie: I began building in public less than two months ago. It’s been the single-most effective way for a solo-creator to build trust with an audience. Here’s why:

This loop, applied consistently, shows others you’re serious. However, building in public is not about stacking up your accomplishments. Building in public is equally about showing your human side. We all fail. From time to time, we miss a milestone or perform a pivot.

When we are humble, authentic, and human, it creates a stronger relationship with our community. Others might stick out a hand, help you up, and offer words of encouragement to carry on.

When building in public, it helps to ask questions. Don’t be afraid if you don’t have all the answers. Your human nature will separate your Twitter account from all of the others.

Jamie: Building a community on Twitter is about quality, not quantity.

Don’t be that person chasing after followers. While being “Twitter famous” must be great, the follower count is not the most important number. Quality matters way more. Here’s why:

A creator’s community is its greatest asset.

For years, bloggers have been growing newsletter lists. There’s a reason they’ve applied a feature for double opt-in. It’s the best filter for high-quality leads. On Twitter, there is no double opt-in, which means you have to be extremely careful with the tactics you’re using to create community.

Don’t fall for the get rich quick, or hack your way to a million followers.

Focus on quality, not quantity.

Ayomide: I can’t stress this enough. Numbers, as impressive and flattering as they seem, don’t matter — people do.

Twitter gives you contact with the brightest minds in the world. Why would you ignore that to chase followers? Beats me. Instead, use Twitter to build a circle of friends, supporters, and partners that you wish you had in real-life.

This essay is a fruit of multiple interactions that kicked off with a tweet by Jamie. From the timeline to the DMs to Zoom, back to the DMs, and then Google Docs.

Amplify the people doing great work! See your replies as a reflection of who you are and your community only as good as it’s members…  You’re the creator of your twitter-sphere and your timeline is the universe. So curate it with stars that shine and see your planet boom like the sun.

Half of my initial Twitter growth was spurred by Feranmi Ogundeko who would retweet any content I posted. When I started a newsletter, the support was initially overwhelming. Tomisin Yeye pulled about 20 subscribers single-handedly by tagging as many writers as she knew. Inem Udidiong is the first paid subscriber on my newsletter. Ajibola Oladipo mentions me amongst the top twitter list of creators. I have never met these people in my life. I found these amazing creators through Twitter and today we’re working together.

Surround yourself with people who reflect the person you want to be.

We believe that the best way to build communities online is not to be entirely focused on building one from the outset, lest you get distracted by numbers. But to find communities instead.

There are people everywhere standing at the edge of the river, looking for a means to get to the other side. Become a bridge for them and watch your community flourish.

People who are kind, respond to kindness.

People who chase clout, respond to people who herald clout.

All who create, respond to creators alike.

Your energy is a magnetic field.

So go online and shine your light, add value, share your work in public and embrace people rather than numbers. These four points are solid concrete for you to mould on. Build your bridge! — Society is rooting for you.

Jamie is the founder of Goodnote, a daily newsletter packed with tiny messages that inspire positive change. For every $1 raised, Goodnote donates letters to children battling adversity. Sign up at Goodnote.org. Connect with him on Twitter!

Ayomide is a creative writer at Ayomideofulue.com. He advocates for writers and creators to take advantage of the modern-day internet by becoming prolific. Sign up for his newsletter at ayomideofulue.substack.com for finely curated tips on writing. Connect with him on Twitter!

The Permissionless Age Part Two: Staying Consistent to Reap Rewards on the Internet

The Permissionless Age: Facing your Fears to Create on the Internet